About a month ago I saw a post on our main competitor’s site: Has Danny Ainge Done More Bad Than Good Through the Past Decade? It’s an interesting attempt to evaluate Danny Ainge’s drafting ability. With Boston week in full swing, the NFL draft just around the corner, and the Belichick detractors getting louder by the day, there’s no better time than now to examine Bill’s draft skills.

Using this statistic, I summed each player’s AV from their first four years in the league, which is the standard length of a rookie contract. I did this for all players drafted from 2000, when Belichick’s tenure with the Patriots began, to 2017, which is the most recent draft class to reach the end of their rookie deals. From now on, I’ll be referring to this sum as a player’s AV. If you average every player’s AV at each draft slot (i.e. the average AV for all players selected first overall, then second overall, etc.) you can see that there is some actual merit to the stat.

We can then use this average as a player’s Expected AV and compare it to a player’s actual AV. LaDainian Tomlinson, for example, was drafted fifth overall in 2001 and posted a ridiculous 62 AV in his first four seasons. Compare that to the Expected AV of the fifth overall pick, 33.5, and you end up with a Net AV of +28.5. Repeating this process for every player we can then roll this data up to the team level and see the who’s who of drafting. 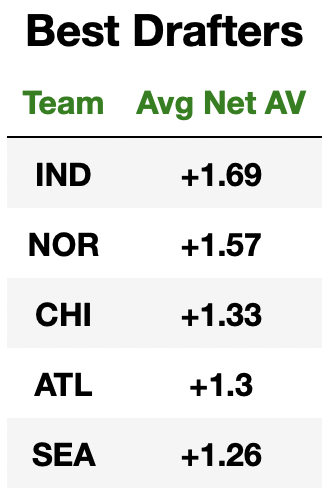 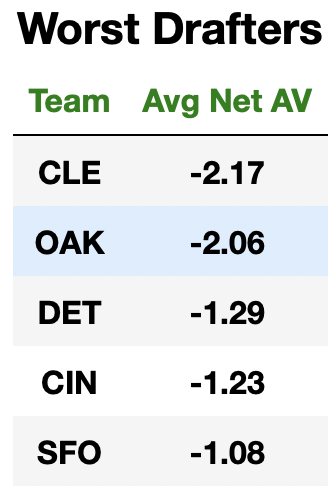 Aside from San Francisco coming in at #5, the list of worst drafters is entirely unsurprising. The best drafters isn’t necessarily shocking but it’s definitely a bit more of a crapshoot. In additional to Seattle, Indy, and New Orleans, I most likely would’ve guessed Green Bay (#6), Pittsburgh (#9), Baltimore (#14) and maybe even the Rams (#26), in addition to our beloved Patriots.

So, how does Belichick stack up against the competition? With an Avg Net AV of +0.53, Bill and the Patriots rank 12th overall. While it may not be a spectacular mark, it does show that, on the whole, Belichick is typically able to find good value in the draft.

This doesn’t quite tell the whole story, though. Check out the Patriots Avg Net AV by round. 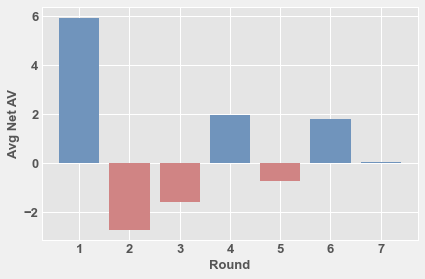 They are wildly inconsistent but this definitely fits the narrative that we already know: 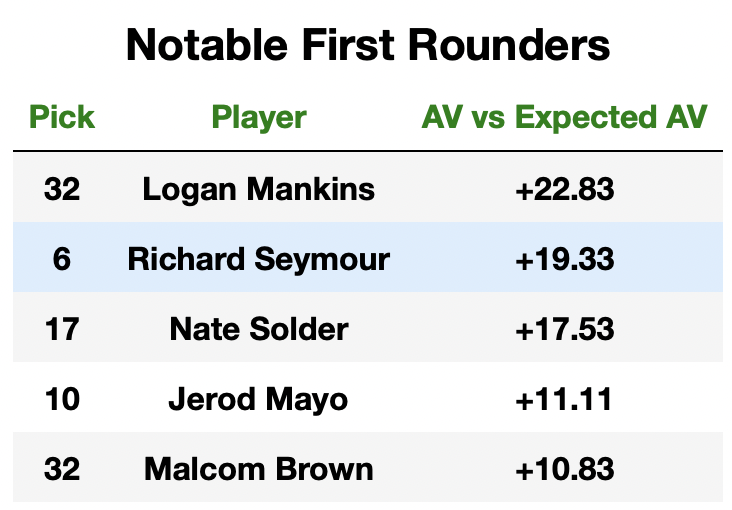 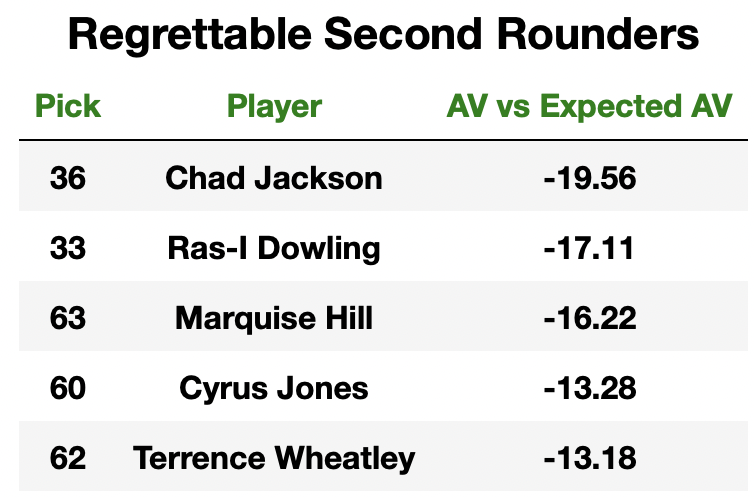 Yes, the players shown above are cherry picked, but there is no denying that the Patriots have plenty of room to improve their scouting process, especially when it comes to players in the second and third rounds. Just look at their percentage of players with a positive Net AV per round:

Notice how it craters from the first to second round yet somehow it rebounds nicely in the fourth? Hell, the fifth and sixth rounds have higher hit rates than the second and third!

Of course, you can’t really talk about the narrative surrounding Bill’s drafting without talking about positions. Take a look at Patriot’s draftees’ Avg Net AV by position below. Keep in mind, I removed a few of the more specialty positions (kicker, punter, long snapper, and full back) that we rarely see drafted.

Just as we suspected, wide receiver comes in dead last for the Patriots. In fact, in his tenure with the Patriots, Belichick has drafted just three receivers with a positive Net AV, none of them in the past decade.

One of the most surprising developments was how poorly tight ends graded out. While Gronk and Aaron Hernandez put up big numbers, they’re actually the only two tight ends Belichick has drafted that went on to post a positive grade. Ultimately their combined Net AV at the position was negated by the team’s other TE selections, most notably by Patrick Pass and Benjamin Watson, neither of whom lived up to their first round selections.

It’s not all doom and gloom, however. Belichick and the Patriots have achieved a positive Avg Net AV in some of the most important positions on the field – quarterback and those on the line of scrimmage. Their picks along the offensive line, in particular, are nothing short of elite. When drafting these positions – tackle, guard, and center – the Patriots have an Avg Net AV of +7.12, second in the league only to New Orleans (+8.2).

There’s no doubt that Belichick has struggled with certain positions but it could also be the case that some positions are just harder to draft than others. With that in mind, I expanded upon the positional chart above to include all teams.

This visualization above shows every team and how well they draft each position. Looking strictly at the columns, you can see that Bill’s positional problems may be more common than we think. Teams tend to have significantly more success at drafting offensive lineman (+2.70), linebackers (+1.33), and running backs (+1.83) than they do tight ends (-3.03), wide receivers (-0.82), and defensive backs (-1.18).

Overall the typical message you hear from the media – “Belichick the GM is hurting Belichick the coach!!!” – definitely seems to be overblown. While there is certainly room for improvement when it comes to his strategy in the middle rounds, and his scouting department’s assessment of certain positions, there is no doubt that Belichick has been a solid, above average drafter over the last two decades.