The Irishman came out in 2019 to a bunch of hype. Martin Scorsese directing a Netflix movie, a bunch of legendary actors coming back together to tell an epic historical tale, and hundreds of millions of dollars spent on the most advanced film-making technology this world has ever seen? Is there any reason to NOT see this movie?

For starters, you really only need this one singular reason to not watch this movie: it’s 3 and a half hours long.

Because of how long this is, without even considering how well the movie is shot, written and acted, it is bad. It’s too long. I can’t do anything for 3 and a half hours without losing interest. Even if Zendaya asked me to make love to her for 3 and a half hours by hour 2 I’d be like “…you wanna play Mario Kart or something now?”.

But the thing is, I don’t think this movie would even keep my interest if it was shorter than 2 hours. I have the same complaint with The Wolf of Wall Street, another Scorsese film. Leo gave the best performance of his life, it was a fast-paced exciting movie with iconic scenes and a unreal cast of characters, and yet, I don’t think it’s a great movie. Every time I watch by the time the boat sinking scene comes on I’m like “oh god we’ve got another 45 minutes?” AND THAT SHOULD MAKE IT NOT GOOD.

People LOVE to think that long movies are good just because they’re long. If you lose interest during a movie, that should be points lost. So many people were saying “The Irishman is incredible” yet they watched it in 3 different sittings. MAKE IT A MINI-SERIES THEN! A movie is meant to be watched in one sitting. If I feel the need to turn it off and revisit later, you’ve lost my interest, that’s a bad movie. Part of what makes movies great is trying to tell a comprehensive story in one sitting. It forces the person making the movie to cut out unnecessary scenes, revisit dialogue, develop the characters in the most interesting ways, but Netflix told Marty “do whatever you want!” so we ended up with every single scene that hit his first draft notepad. And it led to a much more boring movie that drags on.

It was sold to us as “an epic mob movie utilizing ground-breaking technology, following a man through the decades as he’s corrupted by a life of crime and murder”, when in reality it was “three 70-year-old geezers hobble around pretending to be able-bodied 45 year old men who argue about Unions”.

I seriously can’t believe we were supposed to believe at any point during this movie that Robert De Niro was any younger than 55. First of all, it’s Robert De Niro. One of the most recognizable wrinkly faces in America, so even with this technology smoothing him out, our brains know what the man really looks like. He had Joe Pesci calling him “kid” when he looked like this. 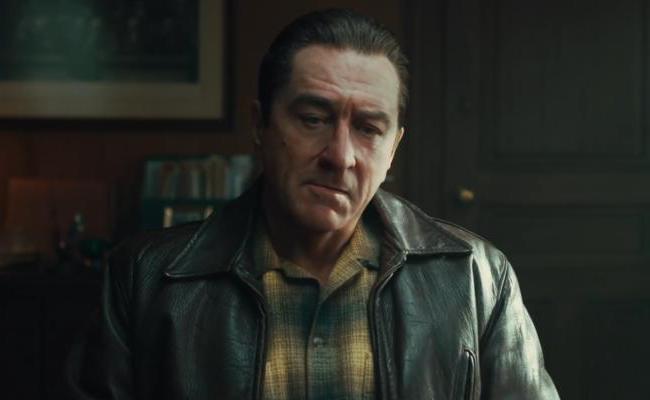 This is not a kid. No one would call this man a kid. This man HAS kids, and even his kids in the movie look way too young to be his kids.

I spent the entire movie just thinking “wait, how old is De Niro supposed to be?” because it takes place over several decades from him being 30ish-90ish, when it really just looks like 60-90. The technology can smooth out his face but he’s still hunched over like your grandpa, walking around like he’s arthritis for years, and talking like he’s out of breath just from getting up out of his seat. I mean,you guys saw the scene where he beats up the shopkeeper right?

THIS GOT NOMINATED FOR BEST EDITING??? This scene alone should disqualify it from that category altogether. Any editor who’s sober with 2 working eyeballs should be able to see the way this scene turned out and go “ya know what, let’s cut it. There’s 3 HOURS AND 28 OTHER MINUTES WE HAVE TO WORK WITH.”

It doesn’t get better as the movie goes on either. Finally like an hour in you meet Pacino’s character Jimmy Hoffa and you start to think that it’s about to start getting good, and you’re dead wrong. You find out this dude just leads a Union. Anyone who describes this as a mob or mafia movie is wrong. It’s a union movie. FAR less interesting.

Even if in real life Hoffa didn’t want to give up being president of the Union, and even if they did kill him because of it, I DON’T CARE. I’m just thinking, they really couldn’t convince him to step down? They couldn’t hold a gun to his head and say ‘hey either I shoot you or you stop it with this union stuff’? Because I’m pretty sure anyone in their right mind would be like oh ok yeah I’ll quit the union I don’t want to die. But NOPE, we have to watch De Niro dance around shooting him talking about fish in a car for a half hour until he unceremoniously shoots him in the least climactic way possible.

BUT…BUT REMEMBER THE JFK ASSASSINATION! Yeah that was a billion times less interesting than I thought. Either implicate what you want to implicate or don’t do anything at all. They ever so slightly implied they were involved with it for 20 something minutes and that was it. I could find more interesting explanations of how it went down by searching “JFK assassination conspiracy theories” on YouTube.

Everyone talks about how the movie deals with “loneliness and regret” when you really don’t see any of this until the last 20 minutes of the movie when De Niro is dying. And even then he has one tough phone call with his daughter and besides that it’s just him stuttering to repeat everything some priest is making him recite. I would’ve fallen asleep by the end if my boy Action Bronson didn’t show up to sell Robbie a casket. Which he did an EXCELLENT job of, seeing as the rest of the actors had a walk in the park for their roles.

The biggest challenge De Niro faced in his role was pretending to not be the most Italian man on the planet. The biggest challenge Pesci faced was pretending like he actually cared about doing this movie besides getting one last retirement paycheck, and the biggest challenge Pacino faced was not going on a senile rant while filming. Other than that, these guys had easy roles. I loved seeing Ray Romano take on his part, I thought Sebastian Maniscalco or whatever his name is (despite being a garbage comedian) did well with his cameo role and Bronson killed the few lines he had! Let me see more of that! I don’t need to see Pesci and De Niro talk about nothing over dinner for 15 minutes, all the while dipping loaves and loaves of bread into wine.

These guys must’ve dumped thousands of carbs worth of bread into wine during this marathon of a movie. By the 4th time it happened I was like ok WHAT IS GOING ON HERE. Was he just trying to show they were super Italian? He might as well have had a full band come out during dinner to play “That’s Amore!”, asked for a round of the best gabbagoo for the familia and talked about killing Pacino at a Billy Joel concert from a Box in the garden. Just hit us over the head with it!

I could rant about how much I dislike this movie for 3 hours and 30 minutes but because I’m not Martin Scorsese, I’m sure I’d bore you to death if I haven’t already. All I’m saying is if this wins any Oscars over all of the other amazing films this year, I will be furious. Just like The Irishman, if the Oscars award this trash movie, I will watch it this once and then never again in my entire life.