April 15, 2013. Tied 2-2 in the bottom of the ninth, one out, Pedroia on first, Mike Napoli at the plate. A hard hit double off the Monster for Nap, Pedroia’s speed was enough to get him home before the throw was there, scoring the winning run! I had never been at a game with a walk-off win, so this one was pretty special. This was Mike and I’s first Patriots Day Red Sox game, one of two Sox games that are of particular importance here, the other being Opening Day. This was also one of the only times I went to the marathon as well. I only have one other real memory of attending the Boston Marathon before; years ago to see my Uncle who was running for Dana Farber. I never went while I was in college, yet year after year, I so badly wanted to party with everyone in the city.

Post game, we headed towards Kenmore Square. The Marathon winners had already crossed the finish line but we considered it was still worth stopping by the race, by the 1 Mile-To-Go marker. Mike asked if I wanted to get a drink and I had said that it didn’t matter to me. We considered going to the finish line to potentially catch Uncle Steve finish the race, but were unsure of his time. I had some friends at Clery’s but eventually told them that we were just going to go home. Also with us was my brother’s friend who was going straight home as he was going to the Bruins later that night, so the three of us just decided to head home.

The train was pretty backed up, as there were people from the Sox game and the marathon. We were stuck in traffic for a good ten minutes, but it seemed to be only because of the large amount of people. I specifically recall being held up at Boylston for a few minutes, but thought it was a regular Patriots Day train delay. We eventually made it to the JFK stop, which was when Mike’s phone started going off. My mother was calling from work, asking if we were okay and asking where we were. An explosion had occurred at the finish line not ten minutes before. To be honest, I was originally skeptical about it all. My mother was using phrases like “explosions” and saying “people lost limbs”. These were the exact terms she had heard on the news. More people on the train were also receiveing phone calls and texts, but it was hard to get a real grasp on the situation. I was so confused. I remember immediately texting my friend who was out at that bar, but heard no response for quite some time. We returned home without any additional information, but immediately turned on the TV and we saw on the news the early videos of what really happened. I was very scared. And I remember feeling useless, because we felt we couldn’t do anything to help, although we so desperately wanted to.

The next day and for the rest of the week, people couldn’t get enough coverage. And in talking to people at work you could see their eyes get watery at even the mention of any incident. Everyone you know had been affected. My eyes watered up talking or even thinking about it, but I often looked away from people in these conversations. 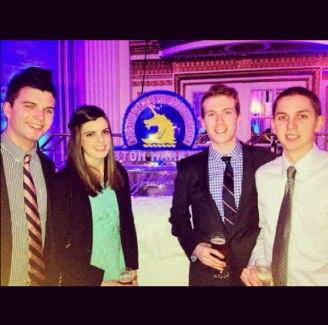 It was scary to think that two nights before, I was in that exact area. I was out at the BAA event at the Fairmont Copley and afterwards we walked to the Pour House. I walked near the finish line, but couldn’t cross because it was blocked off. We saw them them setting up barricades and stands. I pictured what it would like in less than 48 hours. How excited, how jubilant everyone would be. I never pictured the evil of what could have been.

The Boston Marathon is considered a prestigious event which attracts thousands of people each year. This was the 117th running of the Boston Marathon and such a special day in our city. We like to say that Patriots Day Weekend is the unofficial kick off of spring in the city. A weekend for celebrating freedom and honoring the people who sacrifice so that we may have that freedom.

I don’t know exactly how to describe what I felt the next morning or any of the days following. One of the next nights, we attended a vigil for Martin Richard, who lost his life due to the bombings at the Marathon. Martin grew up in the same community as I did here in Dorchester. I had never been a part of something that showed such unwavering support for a family, a community, a city. The park where the vigil was held, hosted thousands of people holding candles and waving American flags. We certainly don’t need any help showing our pride of where we are from, and the tragic events of days before wasn’t going to stop us. President Obama said best, “Boston is a tough and resilient town, so are its people” and I couldn’t agree more.

Later in the week, my father wanted our entire family to attend the Sox game together the Friday after the marathon. He knew that in this tough time, sports could be a rally cry to unite the city and wanted us to be a part of that. However, that game was eventually moved because of the capturing of the two suspects involved in the bombings. That night I felt a little relieved. There was still sadness in my heart for the families of all those affected, but I know this was the very start of our and their recovery. And to see the love and support from all around the country was truly amazing. I knew from then on that our beloved city will bounce back stronger than ever. We are a city that can embrace that challenge and kick its ass.

Two years have passed and we’ve seen just how much Boston has grown. My brother and I will once again be heading to the Red Sox game this morning, now going on our third year in a row. We will no doubt stop by the same Kenmore Square location and watch the runners go by. I will cheer for all of the participants, but especially root for my family and friends running, and all those running as a part of Team MR8. Boston will always be in my prayers, asking for peace and to continue to see the goodness all people can bring.