When Flynn first told me about Creative Equal’s first themed week, Boston Week, I thought it was a great idea. Up until now, everyone’s post has been on point, which is great, but it also means the bar has been set pretty high. Maybe even too high.

I was pretty nervous about what I would write.  How can I do this city justice? I read Kevin’s post going through the various nicknames of the city: Beantown, City on a Hill, The Hub. That’s when it hit me. I’d write about the boys from Foxboro.

With NFL Draft starting in just over a week, I thought what a more appropriate Patriot’s topic than a mock draft? Then I realized I’m not Mel Kiper Jr so I decided to cut it down to a list of five players Belichick and Co. could target throughout the draft. 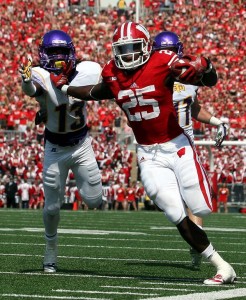 Are you kidding? You want to take a RB in the first round?! This is a passing league! You can find great RBs later in the draft!

It’s definitely not in vogue to take a running back with your first pick but Bill doesn’t like to do what everyone else is doing.  I originally had a different back here, Todd Gurley, but he’s not to be around by the Patriots are on the clock. I decided to see what backs would be available and came across Gordon, the nation’s top RB this past season, who averaged 7.79ypc for his college career. He also had seven 200 yard games.

This is a pick that could make a lot of sense for the Patriots. As Brady nears 40, he’s not going to be able to carry the offense the way he has in years past. If Gordon turns into the lead back he’s capable of being, the Pats could find themselves in a similar situation to that of Denver’s in the late 90s when Terrell Davis helped pick up the offense as Elway neared retirement. 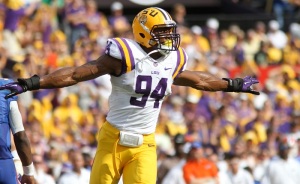 As you progress through the draft, I love the idea of drafting guys that are incredibly gifted in one or more departments, but need some serious work elsewhere. Hunter fits this description perfectly. At 6’6’’ 240lbs, he’s considered a freak athlete: a 4.5 40, 36.5’’ vertical, and a 10’10’’ broad jump. His two biggest NFL comparisons? Jason Pierre Paul and Chandler Jones.

Unfortunately, his athletic ability hasn’t translated into top notch production on the field.  Regardless, I think he’d be a great gamble for the Patriots. Adding a player like Hunter, who could potentially develop into a force and play on the opposite end of Chandler Jones, could go a long way to rebuilding on the defensive side of the ball.

Projected as a mid second round pick, Orchard doesn’t have that type of athleticism that stands out like Hunter. What he does have is the Ted Hendricks award for the nation’s top defensive end after his 18.5 sack season. So ya, the guy can play.

He’s also the Michael Oher of this year’s draft. He changed his surname to Orchard in honor of his guardians that took him in as a kid. Other personal points to note: he’s married, has a kid, and is majoring in economics (holla!).

The Defensive Antonio Gates doesn’t sound like a great comparison for a corner. In actuality, it’s not that bad. I came up with that name due to the fact that Rollins, like Gates, was a basketball player before turning to football for his final year of college eligibility. The former point guard has solid size for a corner at 5’11’’ and 190lbs. Despite his lack of experience, Rollins finished the year with 7 picks and was named the Mid-American Conference Defensive Player of the Year. He’s considered a project but given his size, athleticism, and production despite his inexperience, I think he’s worth the gamble in the middle rounds.

Just thought of a new one: Air Rollins. This could be the start of the next Who Ya Got.

Saxton would be solid value in the later rounds of the draft. 20 catches for 155 yards is a lackluster senior year, yet Saxton was dealing with injuries and offensive scheme changes. Take a look at his junior year and things seem a little brighter: 50 catches for 635 yards. Did I mention the 6’3’’, 250lb Saxton, a former high school receiver, posted this year’s fastest 40 time among all tight ends at the combine?

Keep Your Eye On: Scooby Wright III. Yup. That’s right: Scooby. Wright. III. He’s not actually a member of this year’s draft class but he’s the nation’s top defensive player and he just won my award for Best Name.

Well, there ya have it.  I think a lot of people will note how these picks don’t fill some of our biggest needs, notably corner and the offensive line.  I don’t think there exists a short term solution for corner in the draft. And, quite frankly, I hate drafting offensive linemen.