How Going Away for College Enhanced My Appreciation of Boston

When you live in Boston for a long time, there is a lot of things you take for granted.

Growing up in Hingham and going to school in West Roxbury from ages 12 to 18, I liked Boston as a city. I loved the sports team having been spoiled by the never-ending run of championships, and I enjoyed the history as someone who was becoming more culturally aware. But most importantly to me, it was my home. Sure, I hated the hour-long commute every day, and I became addicted to coffee just because of the daily Dunkin Donuts trips with my parents, but I didn’t really know any other way. It was safe, and it was home. And so, in high school, whenever someone asked me about where I wanted to live in the future, I would respond the same way every time: “Of course I like Boston, and I would definitely come back. That is, as long as I’m not in my parents’ basement.” I really did like Boston, but that statement was honestly a lie. Truthfully, I felt a bit disconnected to the city. I did not have that same love and passion that my parents, relatives, and friends had for the Massachusetts capital, and that weighed on my future decisions.

I saw college as an opportunity for me. To get out. To try something new. To experience a different part of the country. To gain two hours of my day back without commuting. To meet people from Michigan and California as opposed to Weymouth and Newton all over again. I looked as far west as Chicago (West Coast was not allowed, thanks Dad) and as far south as North Carolina, and I finally decided on a school that would give me everything I wanted in a four-year experience regardless of the location: Notre Dame. The trips to Logan, the two-and-a-half hour flights, and the three-hour bus rides to school did not scare me. It was a new, exciting time for me, and I was about to head to a city that I knew absolutely nothing about: South Bend, Indiana. 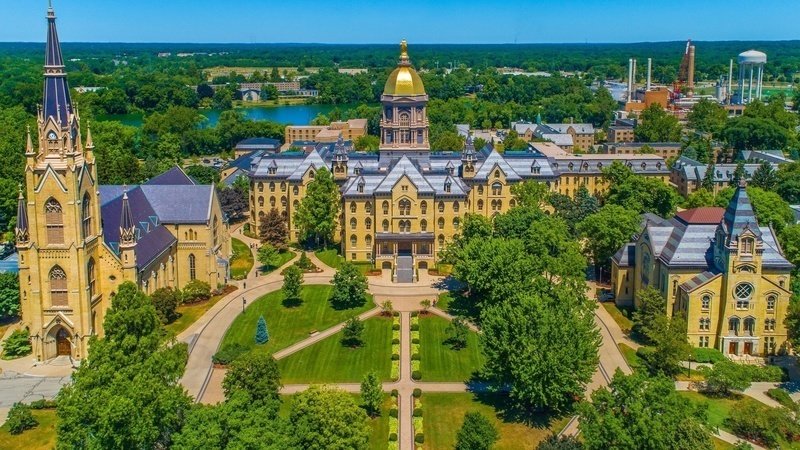 As a junior about to finish his penultimate year at ND, I can say for sure that I wouldn’t trade my experience for anything. I have loved every second of it, from the ups of a great education and world-wide travel to the downs of taking online classes in my bedroom. I sing in the Glee Cub, I study political science and economics, and I live in the best dorm on campus. I consider myself lucky every day, and I am still happy I made the choice that I did. Throughout this experience, though, I have changed as a person, and I have learned an incredible amount of information, not only about French and theology in my classes, but also about myself and my values. What was perhaps the most unusual thing I learned in South Bend, Indiana, though, was something that I had not expected at all: an appreciation for Boston.

Over the course of my time at Notre Dame, I have made what seems like an infinite number of introductions. The Notre Dame intro is the same every time: name, where you’re from, what dorm you’re living in, and your major. Because I was in Indiana, and no one there knew the difference between Brookline and Brockton, I would often identify myself as being from outside of Boston – or sometimes just Boston in general. Every once in a while, I’d find someone who did know the area well, and we go into more specifics, but for the most part people knew me as being from Boston. And just as my response was the same in every introduction, the reaction I got to where I was from was the same every time: jealousy.

It is clear from my ND experience that Boston is very popular among young adults right now. Students from across the country have told me that they absolutely love our city. Their reasoning makes sense, too. The education. The healthcare. The history. The monuments. People even love the Boston accent (or at least what they think it sounds like based on movies). They tell me how lucky I am to be from such a wonderful city, and it began to occur to me how right they were. These people had noticed and appreciated all the things that I had missed just because I had lived there for so long, and I started to reflect on the other perks of Boston that I hadn’t noticed or appreciated enough when I lived there. They loved everything about Boston, so why shouldn’t I?

They love everything about Boston, except, of course, the sports. They hate everything about Boston sports, calling us cheaters and liars, and rambling about how Brady is a system quarterback and Brad Marchand is a goon. And yet it was with sports that my appreciation for Boston started up. I’m known as the biggest Brady fan, loudest Celtics supporter, and most annoying sports fan in my dorm and in the Glee Club, and I often have a target on my back as a result. I had to watch the entirety of Super Bowls 52 and 53 as the lone Patriots fan in the room, and I can tell you for sure that the winning experience was much better than the losing one. In rooting for Boston teams and appreciating our sports, though, I started to find my home in Boston. I cherished these moments being the odd fan out because I felt as though I was a true Bostonian for once, sticking up for our teams and our city, and I started to look for that swelling of emotion in other aspects of my city.

Being in the Glee Club, I have traveled to Boston twice as part of our tours across America during my three years at the school. During the second of the two trips, our group of forty plus students came and sung at St. Cecilia’s in town, bringing our music to a conglomerate of friends, family, and parish members. It was a great concert, and I remember being proud to represent Boston as a member of the Club. When the concerts ended, though, my friends looked to me to lead them. I was the expert, the hometown kid, and they wanted me to give them a tour of the city. We had nothing more than our young legs and some spare change for the T, and, in truth, I didn’t really know where to take them. In times like these I often felt like as much of a newcomer to the city as they did; I didn’t come into the city as often as I would have liked, and I rarely felt the inspiration to explore my own backyard as thoroughly as I had in new cities. But as I walked around Boston that day, showing them sites and providing them with history I had learned in various high school field trips, I fell in love with Boston for the first time. I finally took the time to open my eyes and explore the city almost as a tourist, just as those other students at Notre Dame had told me they had experienced it. And I finally figured out what made the city so great. I had been to Boston about a thousand times since I was born, but I really felt like that was the first time I was in Boston. I remember that day like it was yesterday, and I wouldn’t trade that experience for the world.

And so, during this Boston Week and during this extensive period of time at home, I think it is important for all of us to reflect on why we love Boston so much. We are all lucky to be in a city that has such a strong reputation, and whether we value the historical significance, the Irish culture, or even just the vibe of the city, we are all here for a reason, and we should never take that for granted. We are living in a beautiful city filled with a number of incredible sites and landmarks, and the fact that it took me 20 years to finally see them makes me think that there are others out there who are the same way. So I would make one request as we go forward in this Boston Week: when this whole quarantine period is over, go out there and explore your city as if you were a tourist. As if it were your first time. Boston as a city is truly an American treasure, and we should never take that for granted no matter how long we’ve lived here.

While I am certainly happy that I got out of Boston for college, my experience away has made me reconsider what I want in the future. I often think about those students who would heap praises onto Boston and their experience viewing the city for the first time as an outsider. Those moments had honestly made me feel like a liar for saying I was from Boston. In truth, I was from the South Shore, no accent, went to a private high school, and became a bandwagon Boston sports fan in the two decades where there was the most success. And even worse, I didn’t even recognize the city’s beauty. But now, having gone to South Bend and traveled to many cities around the world, I have found a new feeling towards the area that had raised me: pride. Sure, I might not be from the city limits, but I will always consider myself as someone from Boston. And while I don’t know what the future holds for me in terms of my career or further education, I somehow know that I will be back living in Boston at some point in the future. Back to where it all began. Back to my home.

That is, as long as I’m not in my parents’ basement.