The Money Fight: The Notorious Edition

This is it – we are almost there! This Saturday, August 26th, Conor McGregor will step inside the ring to box Floyd Mayweather. Now, everyone and their mother have been talking about this fight. We’ve heard why Conor has a shot and also why Conor will get smoked. In all this I’ve noticed something: there are a lot of people just making things up.

To be honest, I don’t know much about Floyd other than his record, both in the ring and in the court. What I do know is the UFC. So, for this post, I figured I’d give a quick rundown of Conor’s time in the UFC so you can watch the fight Saturday with a little extra knowledge.

Just listen for 30 seconds starting at the 4:20 mark. Before his UFC debut Conor said he wanted the Featherweight and Lightweight belts. Conor hadn’t stepped foot into an octagon at that point yet he was already talking about making history. This is insane. The announcers are laughing at him it’s so crazy. It reminds me of Brady, after getting drafted with pick 199, told Kraft he was the best thing to ever happen to this franchise. Anywho, Conor get a first round TKO and after the fight dropped this memorable line:

Conor follows up his debut with another win in 2013 and two more wins in 2014, all against quality opponents. These are solid fights but really nothing to write home about considering what’s to come.

2015 starts off with a win in January. Now at 5-0, Conor was certainly making a name for himself, both inside and outside of the octagon, and, as a result, got the next title shot against Jose Aldo. At this point, Aldo is the only featherweight champion the UFC has ever had. He hasn’t lost in 10 years. The build up to it was amazing.

Unfortunately, Aldo got  hurt and had to drop out.  So Aldo drops out and is replaced by Chad Mendes and it is determined this fight will be for the interim featherweight (145lb) belt. People think this spells trouble for Conor because Chad is mainly known as a wrestler. Conor is most dangerous on his feet so Mendes’ gameplan is to get him to the ground where he’s weak. Honestly, Mendes gave Conor some trouble taking him down to the canvas and putting in some solid ground and pound. Ultimately, Conor started doing damage from his back and, after getting back up to his feet, finished the fight pretty quickly. 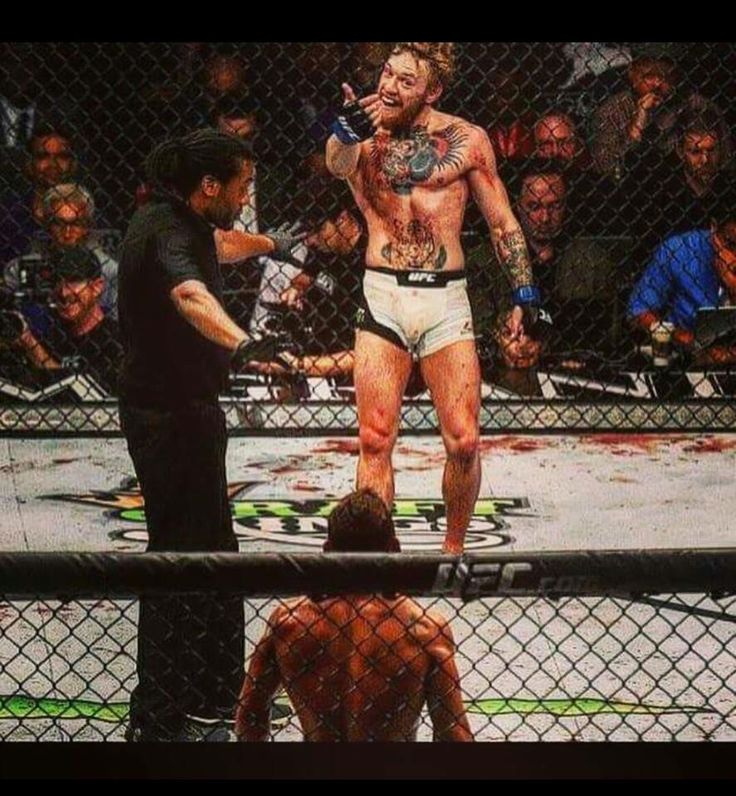 Conor now has the interim featherweight belt and is looking to be the undisputed featherweight champion. He fights Aldo in December 2015 at UFC 194 and wins in 13 seconds.

This is why they call him Mystic Mac. Check out this video I just found that goes through all of Conor’s predictions and the outcomes. I love last one where he sees a slight twitch in Aldo’s right hand and claims that will be his downfall.

Ok so now Conor wants to finish what he started. Remember his debut? He has the featherweight belt and, instead of defending it, he wants to jump up to lightweight (155) and take that belt too. He had plenty of great moments before he signed his next deal though.

It’s crazy how much better Conor is at trash talking than the rest of the roster. Mendes doesn’t even know how to respond so he literally just starts making noises.

Look how boring RDA is – just ho-hum “you’re an easy fight.” Meanwhile Conor’s out there changing bum lives and talking about red panties.

Conor ends up booking a fight with the lightweight champ, RDA for UFC 196. About a week before the fight RDA got hurt so Nate Diaz stepped in. Without the proper time to train for the fight, Diaz says they’ll need to do a catchweight (basically agree to a weight other than a traditional weight class) because he won’t be able to make 155. Conor comes out with the classic line “Make it 170 [welterweight]. Tell him to get comfortable” We all know how this goes though. It’s still a great fight and, while it’s unfortunate that Conor lost, I think he learned a lot from this.

He fights Nate again at UFC 202 and it is an epic war. If you haven’t seen it – try to find the full fight and watch it. It’s unreal.

Finally, the Nate sage is over (or is it?) and Conor is now looking for his next opponent.

He books his next fight against Eddie Alvarez, who beat RDA in the meantime, for the lightweight belt at UFC 205. This was a huge card not just because Conor was attempting to make history but also because it was the first MMA event in New York in years. Just like Chad Mendes, Eddie is a great wrestler with a big overhand right. Unlike Mendes, Eddie actually had a full camp to get into shape for this fight so, again, there were a lot of people saying this would be Conor’s downfall. What happened? Well, history was made and Conor became the first two weight champion in UFC history.

The double champ. If you watch the post fight interview, Conor is irate and with good reason. He accomplished something no one else has done and the UFC didn’t market it in the slightest. In fact, they were so unprepared, they had to go backstage and borrow Tyron Woodley’s (welterweight champion) belt.

That was Conor’s last fight. So, to summarize:

2013 and 2014: he broke into the UFC and rattles off 4 wins and makes a name for himself with his knockout power and trash talk.

2016: 2 wins. 1 loss. His career hits both the lowest and highest points. He shows more toughness in his second fight against Nate than at any other point in his career and follows that up with becoming the double champ.